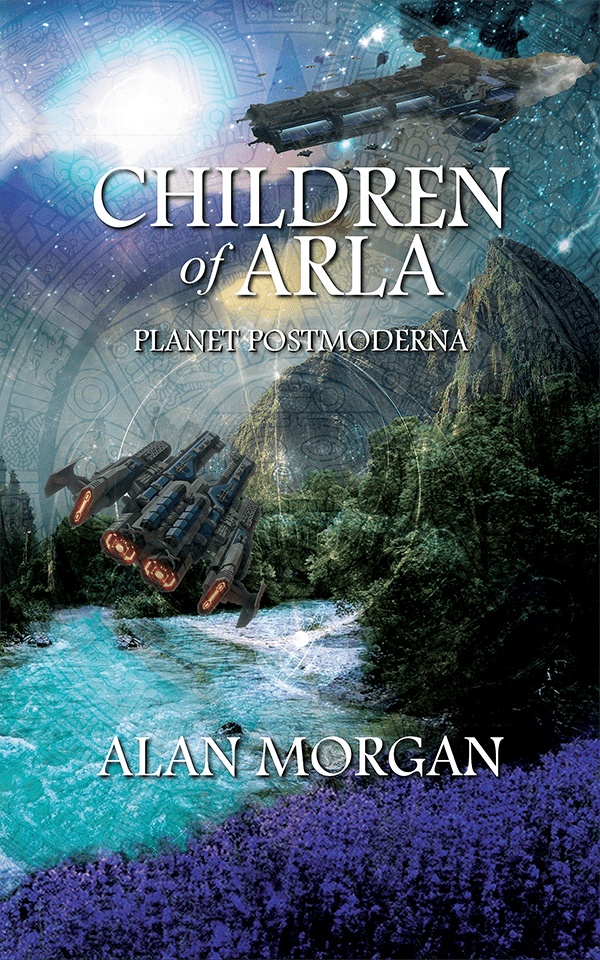 The Children of Arla

This is a scifi opera about ancient civilizations, virtual world technologies, an alien race of bipedal dragons and, an organic virtual planet. The alien species, known as the Hydackians, have been visiting our world for ages, collecting DNA samples that are stored on this planet, known to us as Argus. Native to the planet Arla, members of both factions of this species built Argus as a virtual library to preserve our history and the life of our planet. They knew we would eventually destroy ourselves as well as our planet and this was their attempt to save us from our own selfishness and demise.

The Advent and The Children of Arla (of the same) are what the primary virtual world project of Planet Postmoderna is based on. The short story (The Advent) came first, then came 4 chapters of the book, then a long pause. When we started the virtual game project in 2008, I continued to flesh out the fiction to help provide more guidance for the project. I even added some ideas I got from some of the project team members.

Another rewrite followed in 2011, retitled formally The Children of Arla but then in 2015, I stopped. I hired someone to help me edit and finish the story in 2015, but that attempt to save me time ended up giving me even more work. Feeling a bit frustrated from having to fix many edits, I stopped after reaching the Chapter 17 edits. I did not touch The Children of Arla again after that. The story core (all 85,000+ words) was completed, but I felt it was still pretty raw. I was just too burnt out from working on the project and my full-time job at the time at Solar City.

The original goal of publishing the story was to increase interest in the Virtual World Game Project and get the financial backing and professional attention needed. Maybe some of the people I spoke with (namely investors) would take me more seriously. How naive, huh? I still hope to use most of the revenues generated from the book to help fund the initial expenses of the virtual world project. I need to hire 3D/2D and concept designers and a C# coder. Part of that cost will also be to launch the cryptocurrency and the programming for the integration with the blockchain.

The Children of Arla is written to introduce people to the story behind the Advent Game Virtual World Project. The story also branches out into parts meant to be finished inside the virtual world game and continued in future books. This organic design is intentional. In practice, a player would read the book and complete the adventure in the game.

John Baxter is the former CEO of an influential Virtual Reality Technologies Company. Having built an empire on immersive virtual world technologies and other investments, early retirement and some much-needed time with his family seem well-earned. But his early retirement is short-lived.

On a trip to a mining outpost to aid in settling a labor dispute—his last act of diplomacy for his companies—he is cast into a tragedy that takes him to a faraway world that is ironically an organic virtual world. Created for humankind to find someday by an alien race who has visited our planet and many others throughout the ages, this world will be the stage for events that will change our known universe forever. John and his crew will soon learn they were ominously cast to participate in an interstellar drama. They will learn how many of the team (and you) and much of humankind are the Children of the Arla.

The first Milestone Goal is to hit 20,000 copies sold. That brings us close enough to fund a demo for the Master Virtual World Project. That number takes into account, sales and promotions. It will fund 3-6 months of Design and Development work.

If you have read the book…

Write a Review On Google to help spread the word and generate more interest in the book and the Adventure Game Project.

Write a Review on Google

Watch the podcast interview on TROI about Children of Arla

Listen to the full Audio Recording