In 2008 (as I shared in the last article (Postmoderna Journey Pt1), I went from playing in Entropia Universe to trying to launch a Partner Planet.  Did I know what I was getting into?  Nope, I did not but, did I let that stop me?  No. I was filled with excitement and child-like optimism.

The timing of the launch of the Partner Planet Program could not have been better.  It coincided with a full upgrade of the CryEngine graphics engine.  The new game art and scenery looked fantastic.  It gave me even more to imagine with regard to the possibilities. 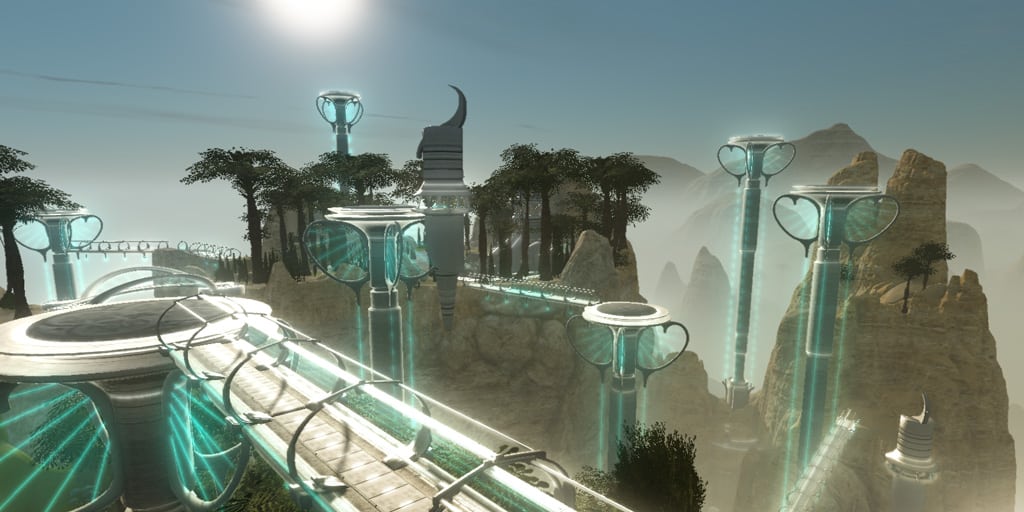 I dove into the Partner Planet Documents and learned as much as I could. I even set up a conference call with Mindark to discuss the prospect of becoming a Partner Planet. They seemed to like our concept and definitely appreciated my enthusiasm. One thing I liked about the program was you really did not need to have any game development experience. You just had to be creative and have deep pockets.

Before going forward with documenting the journey I and Planet Postmoderna have taken, I want to be able to make some things very clear. I owe a lot to the people I met early on that helped me with much of the initial art and work on this project. I learned a lot from them, all in varying degrees. I will do my best throughout this and the upcoming and related articles, to recognize them as best as I can. If I leave anyone out, please accept my apologies in advance. 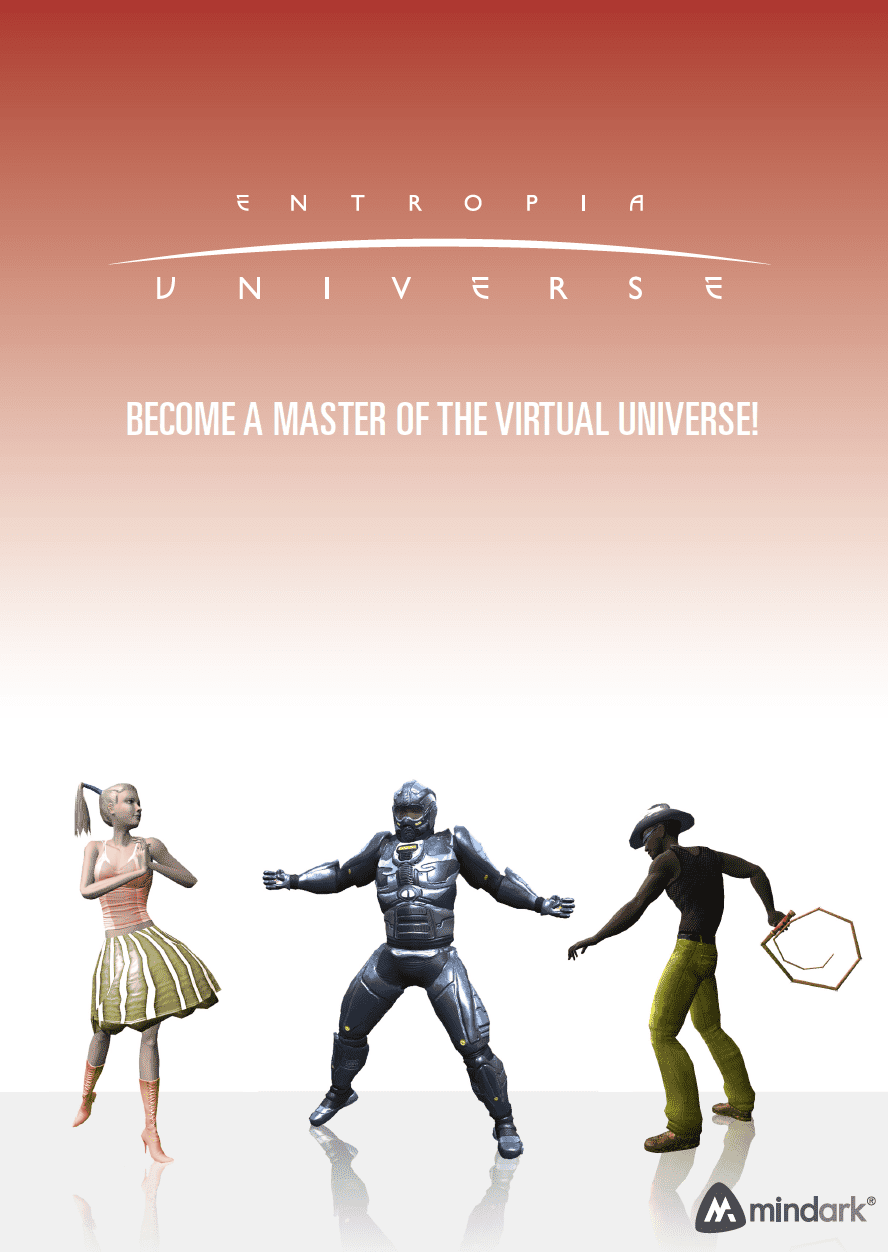 What Planet Postmoderna Started Out As

So what was I thinking?

I knew I could be good at recruiting a team and leveraging their talents. Besides, a lot of successful people were successful because they surrounded themselves with people that knew more than they did. Yeah! We’ll go with that.

One thing I was not short on was determination, drive and perseverance. And, I loved to play video games, especially MMOs and Virtual Worlds.

Starting the planning and coming up with…a name

I began the long process of planning out the project and what the Partner Planet would look like. I had to sketch out the concept, plan it out in detail and pick a name. Oh yes, what would it be called? I really don’t remember exactly how I came up with the name. I just know it had to do with virtual worlds, simulations. I loved playing games like SimCity, the Sims, Civilizations and others in the genre.

What’s in a name?

While looking into what went into a simulation game, I remembered a word, Postmodernism. I thought of the writer, writing about himself, writing. Then I found this:

According to Jean Baudrillard, in a postmodern society there are no originals, only copies–or what he calls “simulacra.” You might think, for example, about painting or sculpture, where there is an original work (by Van Gogh, for instance), and there might also be thousands of copies, but the original is the one with the highest value (particularly monetary value). Contrast that with cds or music recordings, where there is no “original,” as in painting–no recording that is hung on a wall, or kept in a vault; rather, there are only copies, by the millions, that are all the same, and all sold for (approximately) the same amount of money. Another version of Baudrillard’s “simulacrum” would be the concept of virtual reality, a reality created by simulation, for which there is no original. This is particularly evident in computer games/simulations–think of Sim City, Sim Ant, etc.

That was it! Planet Postmoderna was born.

Below is the the initial plan and layout of the the Partner Planet. I met with David Simmonds from Mindark, by phone. He walked me through what I could expect if I moved forward. He explained who would be responsible for what. The revenue arrangement was rather interesting.

Last year, Entropia generated $650 million in transactions. Been around since 2003. 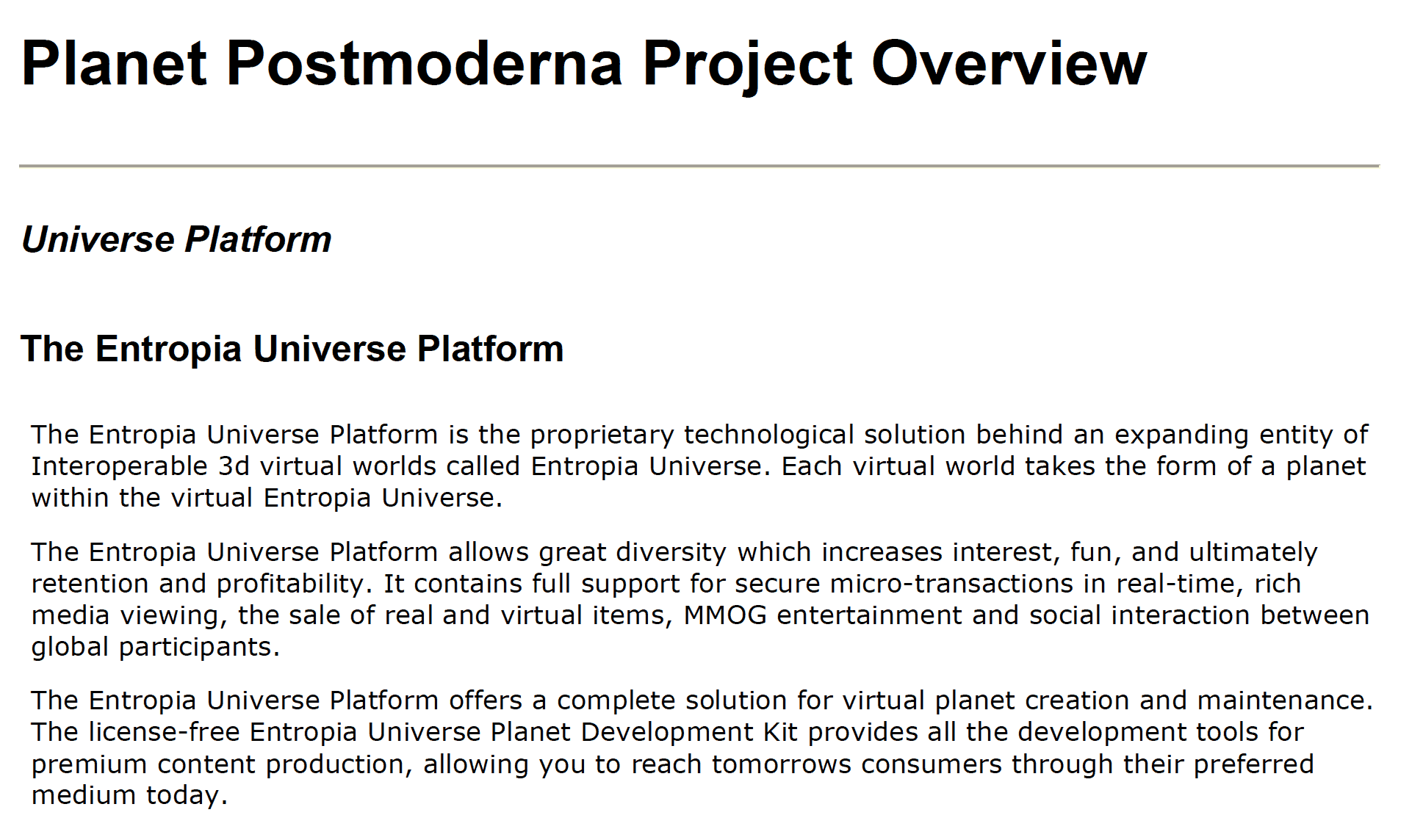 A lot to think about and a lot of work ahead

I had a long road ahead. I not only had to recruit a team but I also needed to get funding. I would likely be able to find artists but the latter part was going to be a challenge.

Next, I’ll present some examples of earlier concept art and models. Read Part 3