The Planet Postmoderna Journey (Pt1): How it started

The Planet Postmoderna Journey (Pt1): How it started

It all started with an article.

The article which was originally published in May, 2008, peaked my interest with the opening paragraph:

“While his friends scramble for jobs flipping burgers or bagging groceries this summer, 18-year-old Mike Everest will be working as a trader in the fantasy Web world of Entropia Universe, buying and selling virtual animal skins and weapons. His goods exist only online, but his earnings are real. In the past four years, he’s made $35,000.

In 2008, this Wall Street Journal article, may have changed my life.  It talked about two virtual worlds in particular, Entropia Universe and Second Life.

I immediately registered for accounts on both Entropia Universe and Second Life. What I learned rather quickly was that making money in the virtual world was a real possibility. It is just not as easy as you might think. Just like in the real world, it takes a lot of hard work and a lot of discipline. Now if you just want to have fun and play in the virtual world, you can do that too.

The first account I set up was on Second Life. In 2008, virtual worlds seemed a little hard to grasp. It was my first time in a virtual environment outside of playing MMO games. It looked different and felt different. To me, it felt like one big chat room, with a lot of avatars in it. There were ones adorning wings, brightly colored clothes, and all kinds of interesting hairstyles. They seemed to lack fluidity however and moved in a jagged manner at times. I guessed it was the servers and lag.

The Second Life virtual world platform was created and owned by Linden Labs. The currency in the world was and is even today, Lindens. The conversion rate was about $1 USD to about 250 Lindens. Since nothing in the world grabbed my attention right away, I decided to wait on putting money into it. I chose to leave for awhile but made a mental note to return. Unfortunately, that was not until about 2011.

I then registered for an account on Entropia Universe. After spending time creating my avatar, I arrived in the starting point of a place called Port Atlantis on Planet Calypso, the primary world. It was a large futuristic-looking city. The sci-fi environment felt good to me. By today’s standard, the graphics were not what we are familiar with in 2021 but, they were impressive nonetheless.

Planet Calypso was a free-range world so I had no trouble jumping into the role of explorer. I definitely wanted to look around. I picked up a starter suit of armor and a weapon from one of the player terminals and immediately went hunting. After a few days of exploring, getting killed and hunting odd-looking creatures, I learned there were no quests or missions. I found that a bit disappointing. I had been familiar with missions and quests in Star Wars Galaxies and World of Warcraft. Not a problem though. I was there to learn more about making money and, I enjoyed the gameplay.

I spent time dabbling in little of everything, crafting, shopping, hunting and and a lot more exploring and, getting killed by creatures. These creatures were more powerful than I had any place to go up against. I even joined a guild at one point.

Wealth is held by those that own property

One thing I learned from both Second Life and Entropia Universe is that the bulk of the wealth was made by those that owned virtual real estate. The very first millionaire in the virtual world was Anshe Chung. She made her first $1M USD in 2006 in Second Life. She built quite a virtual real estate empire. There are many articles written about her. Read this one on Fortune.

Within Entropia Universe, Neverdie, a player on Planet Calypso, owned a lot of property and even a bank that loaned Project Entropia Dollars (PEDs) in exchange for virtual property put up as collateral by players. The conversion rate for Entropia was fixed. It was 10 PEDs for each $1 USD (10: 1).

Virtual Real Estate was big! Treasure Island and a Space Station called Crystal Palace were sold in auction multiple times for hundreds of thousands of US Dollars over several years. Each sale, being even bigger than the one prior. There was a lot of money in this virtual world.

Shortly after I started playing in Entropia Universe, I learned about the launch of the Planet Partner Program. Mindark made this program available to any investors that wanted to launch a planet of their own. The partner would build their own concept using the same game platform of Entropia but using their own art and design assets, their own teams. They were basically creating another gameplay option within Entropia Universe.

As part of the program, Mindark provided training on using the CryEngine Game Platform that the game was built upon. They also provided training and guidance on the economic engine. The developer would basically re-skin the base game for their planet. All of this would be possible for a mere investment of $2,000,000 USD. /sigh After launch, the Partner Planet would split the revenues from the planet with Mindark.

Mindark’s goal was to attract investors that would build planets that would add to the Entropia Universe. They wanted to attract new players, not canabalize the existing player base. For many Partner Planets that came on board, that was not what happened. More about that later.

Needless to say, I went from playing in Entropia Universe to trying to launch a Partner Planet. Read more about that in the upcoming installment, The Planet Postmoderna Journey (Pt2.). Read Part 2 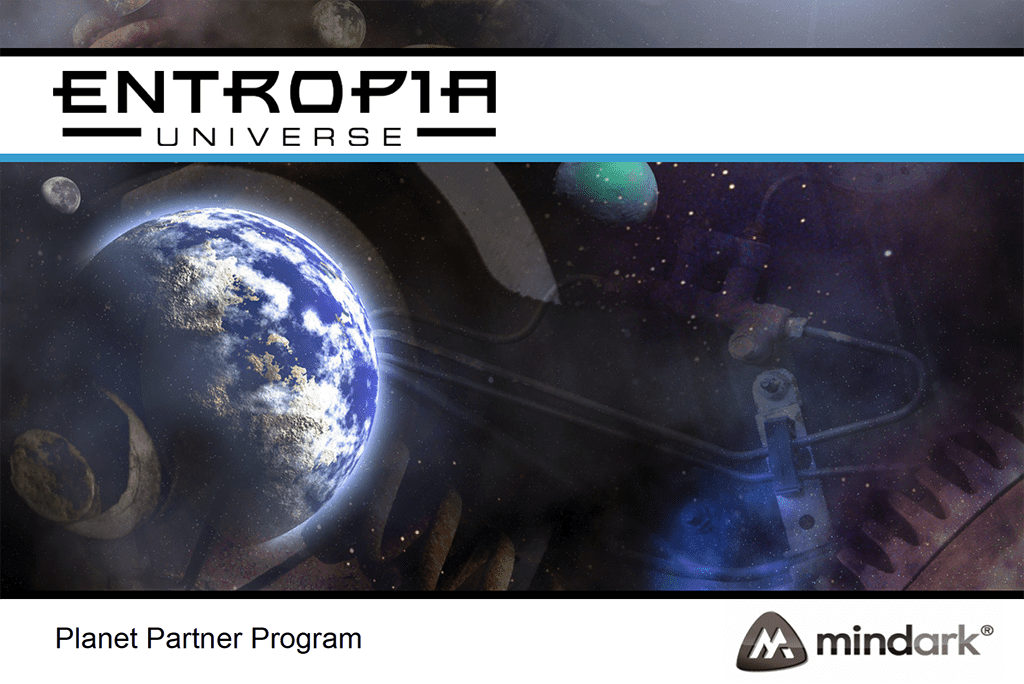